Tottenham will not give up on Ricardo Pereira, report O Jogo, despite having their first offer for the fullback knocked back.

O Jogo revealed on Friday that Tottenham had made a first offer for the right back, who can also play on the left, but the bid was €15m and turned down immediately.

Portuguese clubs often like selling their players for buyout clauses, because they’re usually overpriced, but with Pereira being on loan at Nice for two years, his hasn’t been updated.

The 23 year old is still on the contract which fitted his previous status, and therefore the clause is €25m, something which Porto have been keen to change. 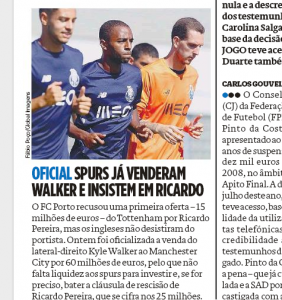 that Kyle Walker’s sale means the club will now ‘insist’ on signing Pereira.

If necessary, it’s believed Tottenham will go to the full €25m figure, and that should be no problem given the sale of Walker.

Ricardo Pereira to Tottenham rumours were launched by Portugal’s Sabado on June 9th, with Spurs then looking for potential Walker replacements.