Janssen is expected to leave the Premier League club before the end of this month after becoming surplus to requirements.

According to Fanatik, Fenerbahce made an offer to Tottenham earlier in the window but the two clubs failed to agree on a deal.

It’s reported Janssen currently doesn’t have any interest from other clubs and he expects Fenerbahce will make a renewed attempt to land him.

Janssen’s desire to continue his career at Fenerbahce has been insisted on repeatedly by the Turkish media, but the club are not prepared to pay a €5m loan fee to Tottenham like they did last season. 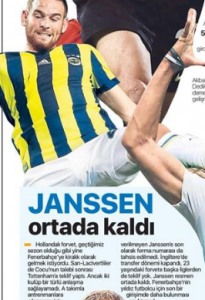 Janssen spent the last campaign on loan at Fenerbahce where he scored 4 goals, but his time at the club was mainly spent on the sidelines after picking up a serious injury just before Christmas.

With a limited amount of interest, and some windows already closing, it’s a difficult situation for Janssen at Tottenham.