Marcus Edwards had another good performance for Vitória Guimarães at the weekend, this time making a beautiful assist in the 2-1 win over Gil Vicente.

The winger’s performance has drawn the attention of many Tottenham Hotspur fans who’d like to have him back, and that’s the subject of a story from newspaper A Bola today.

Following the reaction on social media, the outlet writes that Spurs supporters continue to be ‘incredulous’ with Edwards’ departure from the club last year, and the London side might actually try to bring him back.

Problem is that there should be some competition for the 21-year-old this time, since Manchester United have ‘shown the desire to move forward’ for the winger. 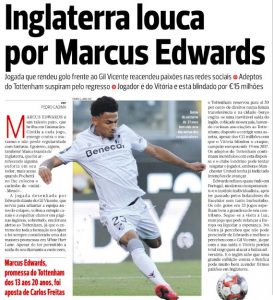 It’s claimed that in Guimarães, Edwards’ departure in the summer is considered to be ‘inevitable’, as he’s very wanted in his home country.

A Bola writes there are ‘curious links’ to Tottenham Hotspur, as José Mourinho side would be eager to ‘fix a screw-up’ they made by letting him go.

Vitória Guimarães have protected Edwards with a release clause of €15m, but Spurs wouldn’t need to spend all that. That’s because when agreeing to let him move to Portugal, the club kept 50% of a future sale. So now they’d only have to pay half of the price.

Since the links with Manchester United sound really vague for now, it seems like Tottenham would have decent chance of bringing Edwards back and satisfy those fans who complain about his departure.