The outlet says the Premier League side have ‘practically concluded’ a deal with Sporting for the 20-year-old to have a loan spell in Lisbon.

Record claims there’s a green light ‘from all three sides involved’ and there only a few details left before the move can be made official.

Porro should be loaned to the Lions for one season, and Manchester City will keep paying for part of his salary. 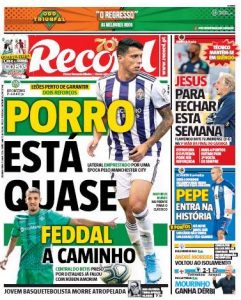 Record claims this deal was possible because of a partnership between Manchester City and Sporting which has been in place since the last year.

The first player to be involved in this agreement was Félix Correia, who left Portugal for the Premier League side on a €3.5m last year. Last month, Manchester City sold him to Juventus on a €10.5m deal.

But Porro’s wish to move to the Lisbon side has been crucial as well.

It’s claimed he’s willing to play for the club due to Ruben Amorin’s tactical system, and that made the transfer a lot easier.