Tottenham Hotspur are one of the clubs in the race for the signing of Porto star Luis Diaz, according to reports from Portugal.

Newspaper Correio da Manhã is the one featuring a story telling how the striker’s recent form is drawing the interest from ‘sharks’ from around Europe.

The likes of Tottenham, Milan and Roma are all said to have ‘an eye’ on the winger.

Diaz had four goals in the Copa America, having scored against Argentina and Brazil, and it’s no surprise that he is now getting linked to a move in the summer.

However, it turns out Porto are said to be pretty calm about his situation, and there’s a very good reason for that. 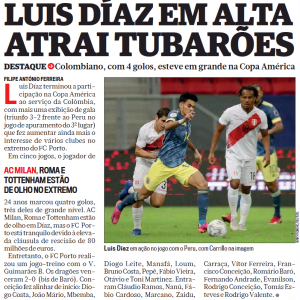 Diaz is protected by a release clause of €80m, so the Dragons have a quite good margin of negotiation in case those clubs really go for his signing.

Plus his contract with the club runs until 2024.

Tottenham had already been linked to Diaz last year, and since that’s a rumour that never really developed, we better wait and see until stronger claims about this chase come up.