On January 8th, we covered claims from Italy of Tottenham interest in Mikkel Damsgaard.

The 20-year-old only moved to Sampdoria from FC Nordsjaelland in September 2020, and is already attracting attention from elsewhere. Gazzetta dello Sport reported Spurs, Inter Milan and Juventus were all keen on the youngster, with Tottenham ‘seriously thinking’ about the signing.

Interestingly, it was explained the Premier League club may have an advantage, with it thought they could agree a deal to sign Damsgaard and then loan him back to the Genoa club.

Tuesday’s edition of La Repubblica also covers Tottenham interest. It’s stated that along with Juventus they’re ‘crazy’ about the player, with interest from both clubs presented as being serious.

The pair have both taken initial steps for the potential signing, asking for information about a possible deal. La Repubblica suggest other Premier League clubs could get involved, along with teams from the Bundesliga, and that would present a fortunate situation for Sampdoria. 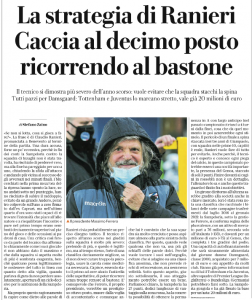 Thrilled with the growing interest, they believe they can get €20m for a player who cost them around €7m less than a year ago.

In this report, there’s no mention of loaning Damsgaard back.

Already a Denmark international, the attacker, who is very versatile, has picked up over 1000 minutes in Serie A so far, playing mainly on the left wing. He’s scored two goals and added four assists in that time.