The Spanish sport media have a complicated relationship with Marco Asensio.

One minute it’s being insisted he’s the future of Real Madrid and the national team, and the next it’s suggested he won’t fulfil his talent, has something of a mentality problem, and a sale to Tottenham (who are continually linked) or elsewhere may not be such a bad idea.

This week El Confidencial published a story which slammed an ‘error’ from the player. Pulling out of the U21 championship this summer, the 23 year old has recently published a picture of himself in a swimming pool.

An image as mild as they come, it’s somehow caused annoyance.

Tottenham have been repeatedly linked with a move for the player and this weekend the English media claimed Spurs want him in any Christian Eriksen deal.

That was originally claimed in Spain, and is again on Sunday. 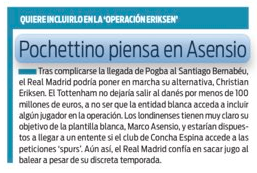 Sport say Tottenham are ‘very clear’ and Asensio is their ‘objective’. Real Madrid are happy to include players in a deal, but perhaps not that one.

For the player himself, another year at the Spanish club is probably best, and then he can see where he stands in summer 2019.