Every now and again the Catalan sport media will have a feature on Premier League clubs trying to snatch away La Masia talent.

There’s not quite the moral indignation there once was, with it being hard for Barcelona’s local media to lecture English clubs given the Blaugrana received a transfer ban for the way they snatched youngsters from around world football.

Sport reports Barcelona are currently trying to sort out the futures of their youngsters, securing those they can and seeing the back of those with better offers from elsewhere.

One of those in question is Alejandro Balde, with Liverpool and Chelsea said to be interested.

Sport say the 16 year old left-sided player has his ‘bags packed’ for a move to England, and Barca are trying to ‘reverse the situation’. 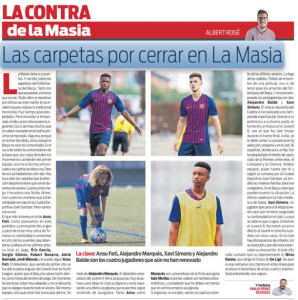 Both Liverpool and Chelsea are going strongly for him, report Sport, however, the latter can’t do anything until their registration ban is either postponed, annulled or has run its course.

That makes it difficult for them to compete with Liverpool.

Barcelona are hopeful they can turn things around.