Home Europe Tottenham clause for Marcus Edwards rubbished – He could move to another...
SHARE

Tottenham Hotspur may be making money with a transfer of Marcus Edwards this summer.

The 21-year-old left Spurs on a free move to Portuguese side Vitória Guimarães last year, with the London side keeping 50% of a future transfer.

And according to newspaper O Jogo today, his good first season in Portugal has been drawing the attention of other Premier League sides.

The report doesn’t name which clubs are after him, but says there have been approaches, with Vitória Guimarães now waiting for the best offer in the summer. 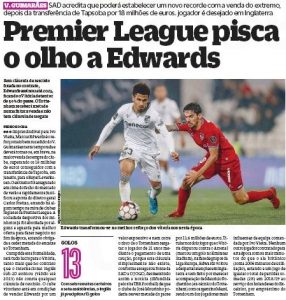 O Jogo reiterates that Vitória shall keep 50% of the offer they accept, since the other half is going to Tottenham. Now regarding some claims which said Spurs could buy the player back by paying €13.6m to the Liga NOS club, the newspaper says it’s all a lie.

They write that these claims have been out in the English media, but after speaking to sources from the Portuguese club, they’ve heard that such clause doesn’t exist.  So the only way Tottenham could benefit from Marcus Edwards now would be to wait for Vitória to make a good sale.