Their story says the Brazilian is now represented by agent Pini Zahavi, having agreed a deal with him back in December. And that would make his move to the Premier League a lot easier.

Chelsea are once again named as the club who’ve been strongly interested in Telles. Record says this chase dates back to the time before the Blues were suspended from making signings in 2019.

Now since Zahavi is known for having a big influence in the Premier League, it sounds more likely that the fullback could finally fulfil his dream of moving to England.

Telles had been represented by his sister Hellen. 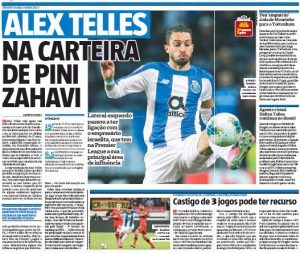 Although getting a working visa is normally a problem for Brazilian players, Record points out Telles would have no problems, since he has an Italian passport.

Even without the passport, the size of his fee would have helped him get enough points for appeal process.

It’s also claimed that Porto are expecting to make €40m with his sale. That’s the amount set in the release clause of his contract, which expires in 2021.

Newcastle are club who have ‘moved the most’ for signing –...