Isco to Tottenham may well be absolute nonsense, although both the Spanish and English media have insisted it isn’t, but it’s a nice story. The idea of the Spanish magician donning a different white shirt and becoming a folk legend at Tottenham is romantic and it may well be achievable.

Marca reported this week that renewing Isco’s contract is a priority for Real Madrid, but it can’t be that important considering there’s been no attempts yet and it ends in June 2018.

Spanish newspaper Sport have a different idea, and they claim Isco is refusing to renew, and Real Madrid will sell if he hasn’t signed a new contract by June. However, English claims of a €35m fee are said to be wrong, with Sport saying Madrid will try and create an auction to get as much money as possible. 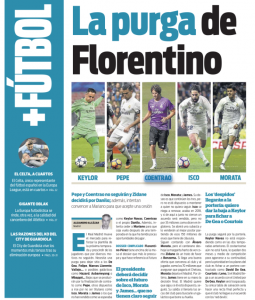 In reality, Madrid simply aren’t going to get €50m/€60m so Tottenham could still have a decent chance should Mauricio Pochettino want the player. It may take a change in approach but with Erik Lamela pretty much ceasing to exist in recent times and Pochettino’s repeated failed attempts to bring width and speed, Isco could be a different kind of answer.

In October Marca reported that Pochettino is ‘loco’ for Isco and earlier this month the same newspaper reported the Real Madrid player is ‘satisfied’ with what he’s heard from the Tottenham manager about a possible role.

The image of a grinning Pochettino sat with his arm around Isco as the 25 year old (it’s his birthday in April) signs a five year contract is one that would help push Spurs that little bit further forward, both on and off the pitch.

It’s remains unlikely, because of reality and all that, but Isco to Tottenham just has something special about it.