We’re starting to believe that Gazzetta dello Sport aren’t exactly sure where Dries Mertens is going at the end of the season.

The Belgium international has a €28m release clause in his contract, meaning anyone could come knocking, and the first mentioned were Manchester United.

A week ago, the Italian newspaper stated the forward ‘could conclude his career’ at Old Trafford, but now the Red Devils are nowhere to be seen, with Arsenal and Tottenham being touted instead.

On paper, this makes a lot more sense, as both teams play far more attractive football than what José Mourinho likes to offer, and you could see Mertens thrive under someone like Mauricio Pochettino. 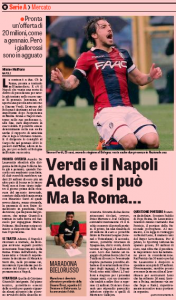 To be perfectly honest, looking at how Gazzetta word this, there isn’t a lot of confidence in their suggestion, just chucking both Arsenal and Tottenham in brackets after saying ‘he could end up in the Premier League’.

Furthermore, considering Arsenal still don’t have a manager, it seems unlikely the club know what their exact summer plans will be as Wenger’s successor could desire another player as his attacking reinforcement.

Then again, at €28m, it’s certainly worth a gamble.