Of course it is, HSV lurch so much from one crisis to another that unearthing a wonderboy was never going to be purely a good news story. Arp has got himself into Hamburg’s team, despite being just 17 years of age, and has scored two goals in three matches. Considering he only played a minute in the match he notched a blank, that’s a remarkable start.

With a contract running out in June 2019, and Hamburg’s chiefs knowing that often everything which can go wrong does go wrong, there’s some panic.

Chelsea were linked during the summer, having made a ‘lucrative’ offer to the player. Antonio Conte’s side were brought back into contention again this week, and Chelsea get another mention in this week’s SportBild.

But so do Arsenal, Tottenham, and Juventus.

The German magazine goes big on Arp’s situation, saying he had requests from big clubs earlier this year, and those clubs are named as Chelsea, Tottenham, Arsenal and Juventus.

It’s not a bad selection.

So panicky are HSV that they’re even conceding Arp could leave them relatively quickly, but it’s still hoped he’ll sign a new long contract so they can get a better fee. 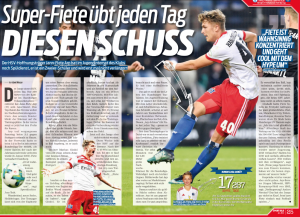 Right now, Arp is best where he is, at relegation struggling Hamburg. He’s getting games, which is something that almost certainly wouldn’t be happening at Chelsea, Tottenham, Arsenal or Juve… or any other truly big clubs.

Hamburg need a hero, and Arp is the man of the moment. A stay is probably best for him, best for Hamburg, and even best for his agent in the long term.

Surely even HSV can make all the dots join on this one. A reasonable, but not wild, wage, a tempting goal bonus, and perhaps even a release clause should Arp progress and then want an exit at a reasonable price.