During the last winter transfer window, Sebastian Polter swapped QPR for Union Berlin, and it’s widely accepted the 26 year old took a step back in his career by doing so.

The attacker’s time with QPR hadn’t been a disaster, and Polter insists it was his decision to leave the Championship club, rather than being forced out.

Polter had longed wanted to play in England, and has told SportBild it was his ‘dream’ to get to the Premier League, but with his children living in Germany, the footballer decided he had to go home.

Asked what he’s lost out on since leaving QPR and signing for Bundesliga 2 side Union, Polter was honest about the financial hit taken: “A lot of money! I put aside my dream of the Premier League: for family reasons, because I wanted to be closer to my children. Many have told me that maybe it wasn’t the smartest decision. But I’m glad to play for 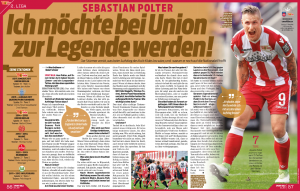 Rather than sulking his way back to Germany, Polter quickly hit the ground running, and scored 7 goals in 15 games in the second half of last season. So far during the current campaign, the forward has 7 goals and four assists, helping Union to third in the table.

The ‘dream’ of promotion with QPR may have been left behind, but Polter now has a reasonable chance of getting to Germany’s top division.