As the Portuguese media has travelled to London to follow Sporting’s match against Arsenal this week, newspaper A Bola took the chance to interview a West Ham player as well.

Xande Silva moved from Vitória de Guimarães to the London side in the last summer window for €1.5m. He was initially bought to join the U-23 squad, but claims to be waiting for his chance in the first team.

Given all the other signings, and that 21 year old Silva was expected to simply be a youth option, he’s been largely forgotten.

Although Portuguese players normally complain about the food and the weather in England, Silva doesn’t seem to be concerned about these things, and says he has what he needs to succeed at West Ham.

“Here I am in a new culture, different, both socially and in football,” Xande Silva told A Bola. “It’s much faster. ‘How can you play so calm?’ Some of my teammates ask me.” 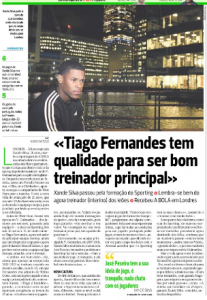 “This is a great experience, here there are all the conditions for a Portuguese player to play, you just have to stay focused.”

On Manuel Pellegrini, Silva said : “He is a good manager, with great experience, which he has acquired in the great clubs where he’s been”.

And the footballer makes to sure say he’s waiting for a chance: “My time will come!”