Ahead of Sporting’s game against Arsenal in the Europa League, Portuguese newspaper Record has chosen a former Gunner to be interviewed today: Gilberto Silva.

The Brazilian midfielder made 244 appearances for the London side between 2002 and 2008, and still follows the club, so he was capable of analysing the arrival of Unai Emery and the new players in the squad.

“The team is playing well,” Silva told Record. “All the change requires a bit of sacrifice from the players and everyone who works at the club, because you have to give the manager time to implement his ideas. But for the start of a project, the results have been positive.”

Asked about the partnership he had with Patrick Vieira and the difference of the current midfield players, Silva said: “The player profile of that position has changed over the years. Me and Patrick Vieira were strong in the defensive role and we gave stability to the team. Nowadays, many clubs have given up on that and bet on two number 8s, and some have lost some defensive protection.”

“For some time now Arsenal have not had a number 6, as is the case of Torreira. Playing him with Xhaka, or even Torreira with Guendouzi, or even the three, Arsenal gain balance and protection. Torreira knows how to position himself and plays simple.” 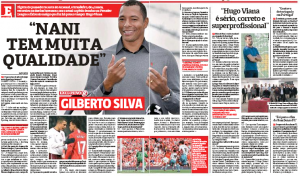 On the similarities between Emery and Wenger, Silva said: “He retains the essence, a quality and technical game. It’s a mark of Arsenal, with fast counter-attack moves, many of them deadly for the opponent. A lot of talk has recently been made about the building of a play that started with the goalkeeper and ended in a goal. Good passes and speed in the search for the goal is something that Arsenal have shown over the last few years.”

Coincidentally, Sporting’s biggest star this season is a player who Gilberto Silva has faced before. Nani used to play for Manchester United in those years, and when asked if he remembers him, the Brazilian talks about the big games.

“Of course, yes. Nani had a lot of technical quality, speed, and it was difficult to mark him. It’s still like this today. The duels between Arsenal and Manchester United were very good and with a lot of respect, but the rivalry was not left out. There were some controversial games, with a very hot mood, but it was part of the rivalry.”