Home Premier League Chelsea ‘Time is running out’ – Player getting nervous over potential transfer to...
SHARE

Jules Koundé is getting nervous about his move to Chelsea as they struggle to get a deal done with Sevilla for the defender.

That’s according to Diario de Sevilla, who cover the situation today and the uncertainty around whether it will happen.

They explain that Kurt Zouma being uninterested in a move to Spain would complicate matters.

Chelsea and Sevilla had been working to value the defender to then take it away from the €70m release clause in Koundé’s contract.

The Blues were thinking of offering €35m plus Zouma, but Sevilla refused to accept a valuation over €25m, which is apparently what West Ham are offering.

Instead, Sevilla were eyeing a €45m package, but Zouma’s apparent desire to stay in the Premier League will force them to look at other solutions.

It’s an unnecessary complication, and now ‘time is running out’ for them and Chelsea to find a deal that suits all parties. 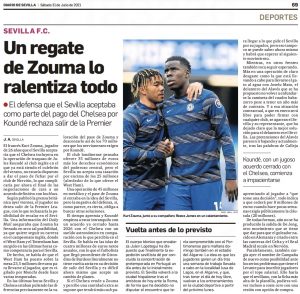 In the interim, Koundé is ‘starting to feel uneasy’ about the situation, having already agreed on a four-year deal with Chelsea for an ‘astronomical salary’ compared to what he is currently earning at Sevilla.

There has been talk of a €4m-a-year deal, which means that the player ‘literally has no way back’ on his decision to leave Spain, and it would be difficult for him to accept a change of plans at this point.

The hope is that if Chelsea do sell Zouma, they will have more money to meet Sevilla’s demands, but that’s uncertain and, Diario say it is now a case of ‘wait for the next move’.