Brighton and Hove Albion are keen on Benfica forward Darwin Nunez and have been negotiating a deal for the last two months.

That’s according to O Jogo, who cover the Seagulls’ attempts to improve their forward line this summer.

The newspaper explains that despite the fact Darwin has not yet returned from an injury to his right knee, he continues to be a name that is well-liked in the transfer market.

According to the newspaper’s information, Brighton are ‘in pursuit’ of the Uruguayan forward with their ‘first shot’ having been rejected for ‘insufficient powder’ – in other words, Euros.

That will not put an end to Brighton’s interest, though, with them having followed Nunez since his time at previous club Almeria.

Brighton are not short of cash, having just sold Ben White to Arsenal, and their intention is to improve their initial offer, which was around €30m.

That arrived at Benfica after contacts between the two clubs over the last two months, and the Portuguese side have made it clear they want at least €45m for the 22-year-old. 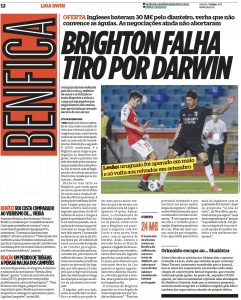 They believe highly in the striker and feel that he could increase in value this season as the effects of the pandemic start to diminish.

The player, for his part, feels ‘very happy’ at Benfica and can improve on last season, when he managed 14 goals in 44 games.

However, the ‘call of the Premier League’ could change that, and it’s ‘certain’ that Brighton will continue to negotiate with Rui Costa and his peers, as well as Darwin’s agents.

In fact, there is ‘openness’ from the Premier League side to try and close a ‘short-term deal’ for the forward, which sounds like a loan deal, but that isn’t explicitly stated.