Home Europe ‘There will surely be an agreement’ – Club ready to sell player...
SHARE

Earlier this month, Sport reported Barcelona are ‘very much waiting’ for Newcastle United to make a move for Philippe Coutinho.

The La Liga side sacked Ronald Koeman and appointed Xavi Hernández as his successor.

Even before the Spaniard’s appointment, Barca president Joan Laporta revealed, during a meeting with supporters, that the club plan to make three additions in January.

Sport on Tuesday say the Catalan club can make new signings if they manage to lower their wage bill.

That’s where the 29-year-old comes into the picture as his departure will not only lighten the salary budget, but it could ‘indeed lead to three incorporations’.

Xavi’s arrival can give the Brazil international a fresh opportunity, but it seems difficult for him to adapt to the new manager’s playing style.

Sport state ‘all the eyes of Barca are on Newcastle’. At the Camp Nou, they are aware the Magpies are planning to invest big in the winter market and the ex-Liverpool star could be a target for them since he has a ‘great image in England’. 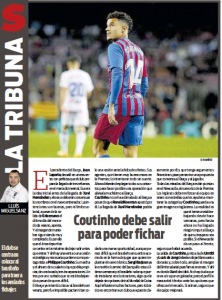 The newspaper states: ‘The reality is that the issue has been worked on for weeks, but so far no input has reached Barça that his transfer is possible.’

In the event Newcastle decide to ‘step forward’ to sign Coutinho, ‘there will surely be an agreement’ with Barcelona.

Only time should tell whether or not Newcastle will come forward to sign the South American.