Home Europe “So much potential” – Ferguson ‘impressed by Sancho’, gives his thoughts on...
SHARE

The winger has been a priority target for the Red Devils for over a year now and there’s belief the deal could go through this summer.

Sancho is currently with England, preparing for their upcoming Euro 2020 clash against Scotland.

This week’s edition of SportBild also includes an interview with Manchester United legend Sir Alex Ferguson. The Old Trafford great gave his thoughts on the upcoming clash between the Three Lions and Steve Clarke’s men.

Ferguson believes England have an advantage, not only because they started the tournament with a 1-0 win over Croatia, but also because of the quality in their attack.

According to SportBild, the former Premier League manager is ‘impressed by Sancho’, and he even heaped praise on the 21-year-old.

“I think a lot of Jadon Sancho, with his one-on-one duels, as an assister and scorer, he is extremely dangerous. He has so much potential, he helps the team. That’s why he’ll be 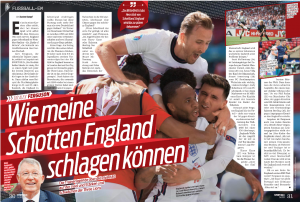 valuable to England over the course of the tournament,” the Scot said about Sancho.

The England international’s admirers at United continue to grow and Ferguson’s latest public comments could come as encouragement for both Ole Gunnar Solskjaer’s side and Sancho.