For the past few days, reports coming out of the Spanish press stated West Ham United have an interest in Villarreal star Arnaut Danjuma.

The forward joined the La Liga side from AFC Bournemouth last summer and finished the debut campaign in Spain with 16 goals and four assists.

It’s no surprise his fine displays have caught the attention of clubs in England, including the Hammers, and on Thursday, AS reported West Ham are the main favourite to sign the 25-year-old in the ongoing window.

AS’ report came after Villarreal president Fernando Roig told the same outlet a few days ago that the Netherlands international or Pau Torres’ sale can improve the club’s finances.

“It is logical that when talking about the market it is players like Danjuma or Pau, who are the ones that sound,” Roig told AS a few days ago.

On Thursday, Roig was leading the presentation ceremony of the season ticket for the 2022-23 season, where he also admitted the Spanish club have no financial issues.

His comments are relayed by today’s edition of El Periódico Mediterráneo. 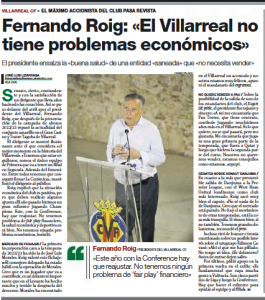 After admitting his desire to retain Torres at the club, Roig was quizzed specifically about West Ham’s reported interest in Danjuma.

Responding to that, the Villarreal chief said: “I don’t know anything about Danjuma. I think the market is stopped. There isn’t movement like other seasons, things are calmer. If they [offers] come, that’s fine, if they don’t, that’s fine too. We have great forwards.”