Mais Futebol had already reported the Villans’ attempt to buy the player with an offer worth €30m. This time, it was claimed they raised the amount in bonuses, so that turned into €30m plus €5m.

Now as newspaper Correio da Manhã today covers the claims, they say those numbers will still not be enough to take Otávio from Porto.

The outlet claim that following the sale of Fabio Vieira and Vitinha, the Dragons are no longer pressured to negotiate their players, and can now be tougher in the talks.

So Otávio would now only leave this summer if someone shows up and trigger his release clause, which currently stands at €40m. This amount will stand until the 15th of July, and then will rise to €60m. 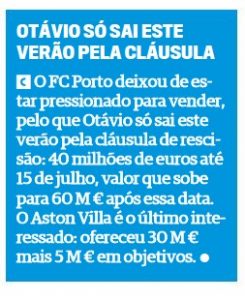 Something interesting about this chase is that when Mais Futebol reported the first bid from Steven Gerrard’s side, part of the Portuguese media claimed the offer had actually come from Leeds United.

And when the second offer was claimed yesterday, journalist Pedro Sepulveda came up to say the Villans are not interested and such attempt did not exist.

At this point, only time will tell who’s right.