On February 17th, Caden Ser reported Barcelona hired I3 Ventures to plan an online attack against their current and former players.

According to the report, the company created hundreds of accounts on Facebook and Twitter and it was undertaken with an intention to damage the image of current and former players, and also presidential candidates, online.

Sport sat down for a lengthy interview with Barcelona presidential candidate Víctor Font and he admitted to knowing about the coordinated online attack for a while.

“A few years ago [I was aware]. They were very visible, because they were always the same, coming out at the same time and with the same arguments. I mean, in a coordinated way,” he said.

When asked if he’d always thought people within the club were involved in ‘Barçagate’, Font said: “Not at all. It is something new and still today, from the scandal uncovered by the Cadena SER, inexplicable. I have a mixture of feelings, between surprised, angry and sad,” Font added.

“It is very difficult for me to find an explanation as to who is behind it, because we have been working for a long time on a project for the future of FC Barcelona, not two months or a year, more than six, and we have always done so constructively.

“We’ve never gone against anyone, not even the current president or his board of directors.”

Bartomeu has publicly denied the allegations and Lionel Messi has also revealed the La Liga winners’ chief addressed the players on ‘Barçagate’. 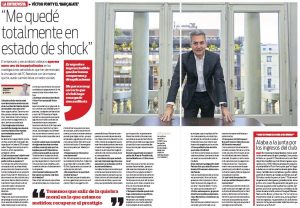 When asked if Bartomeu should have resigned, Font explained: “If in the end it was shown that the president was aware of everything and endorsed it, it is a cause for immediate resignation.”