On February 25th, we covered a report from Belgium on the future of Jonathan David.

The 20 year old has 23 goals and 10 assists in 38 Gent matches so far this season. He’s been playing flexible roles, operating as an attacking midfielder, centre forward, and occasionally a little further wide.

Naturally, there’s been lots of claims of interest, and these have come to a head this week. Claims from Belgium have been twisted by the English media, and then found themselves back in Belgium again, leading to a confusing situation.

However, some interest is genuine, and this week it was claimed Manchester United regularly send someone to the Ghelamco Arena, and they can’t have failed to notice David’s progress.

HLN, who have been leading with the claims, spoke to the player’s agent, Nick Mavromaros, a few days ago, and he made clear a move to Old Trafford would be a dream: “The progress he’s made since his debut in August 2018 is enormous. It is hard to determine where his limits lie. His ultimate goal is to turn out for one of the five best clubs in the world.

“He has been a childhood fan of Barcelona. Real Madrid, Manchester United and Chelsea are just as much part of his dreams, but for the time being we must remain humble: the next step in his career cannot be too big. What Jonathan does in the Belgian league is fantastic, but he did not finish the match at AS Roma. On Thursday he will have the opportunity to show that he can also be decisive in Europe against major opponents. That must now be his first goal and his next step.”

This followed former Belgium international Marc Degryse telling the Belgian media: “Do not go from Gent to a small club. Rather wait. Something big will come. And that top club will come. I think Manchester United is something for you – I’m sure you will be there in about a year and a half. Believe me.” 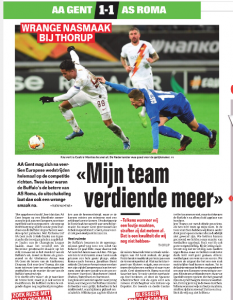 David had the chance to shine against AS Roma on Thursday evening, and did so, scoring in a 1-1 draw. Unfortunately it wasn’t enough for Gent, as they’d already lost the first leg of the Europa League tie 1-0.

Several clubs had scouts in attendance, and HLN report Manchester United were one of them.

The pieces are fitting together, and whilst it’s just circumstantial for now, it’s worth keeping an eye on.