Home Europe In surprise twist, Everton can now get Dendoncker for ‘€20m or more’,...
SHARE

Yesterday, we did a bit of detective work regarding an alleged Everton interest in Anderlecht’s Leander Dendoncker, discovering it was just a vague punt by Het Nieuwsblad.

The Belgian side, on paper, aren’t interested in selling, having already let one of their star midfielders (Youri Tielemans) spread his wings and try his luck elsewhere this summer.

However, Anderlecht’s director of football, Herman Van Holsbeeck, has never hidden the fact every single one of his players has a price, and if the right offer came along, they would find it difficult to say no.

If Wednesday’s edition of Het Nieuwsblad are to be believed, that price appears to have dropped even further. 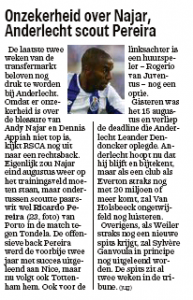 They write: “Yesterday was August 15th, and the deadline for Leander Dendoncker’s transfer from Anderlecht passed. The club hopes he will stay, but if a club like Everton comes in with €20m or more, Van Holsbeeck will no doubt listen.”

As you can see, the Toffees are once again mentioned as the likeliest side to step forward and try to buy Dendoncker, but it’s not the most convincing.

Could this be the player himself, who has made it clear, via his agent, that he wants to leave for a new challenge, putting pressure on the club?

It’s nothing concrete yet, but, as we explained yesterday, it seems unlikely that Ronald Koeman’s club have been picked out of thin air.

There’s no smoke without fire, even if, right now, it seems to be more of a vague wisp emanating from dying embers.