Home Europe “Between €25-30m, we have a problem” – Clarity on Dendoncker threshold after...
SHARE

Leander Dendoncker is a new hope among Manchester United supporters eager for midfield reinforcements. Despite Jose Mourinho moving from Nemanja Matic to Dendoncker seeming an unlikely change of tact, the Anderlecht player being linked has generated some excitement.

Belgium’s De Morgan broke the news that Manchester United are set to watch Anderlecht in action tonight. There’s nothing strange there, the Premier League club have been sending scouts to watch Anderlecht for years, so it’s natural they’re back once again.

Anderlecht are perhaps the most scouted Belgian club and lists of those attending are released on an almost weekly basis. In itself, it was a nothing story, that is until De Morgan said the target is Dendoncker.

The more transfer weary or wary may believe this was an educated guess from De Morgan, with Youri Tielemans now gone, 22 year old Dendoncker is the obvious target.

Manchester United have been linked to the midfielder previously, although there’s been nothing especially concrete, so it all fits in and produces a transfer story which fans were happy to hear.

Anderlecht have been determined to keep the player this summer, letting the Belgium media know it’d cost €38m to change that stance. Such a figure always seemed wildly ambitious, and now it’s been unmasked as nonsense.

Herman Van Holsbeeck, Anderlecht’s sport manager (similar to a director of football) is 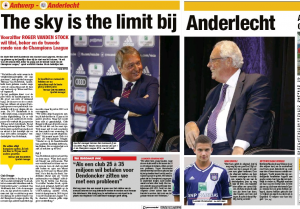 quoted by Friday’s Het Belang van Limburg as saying: “We want to cherish him, but if a club is willing to pay between 25 and 35 million, we have a problem.”

Oops, always best to stick to the same story.

Van Holsbeeck continued: “Against Manchester United, he has shown twice that he has the potential to play at a top European club. We are lucky that the Champions League will not start until September, otherwise we’d have certainly lost him. We would like to see Leander here another year, to work together for a transfer next summer. Just as we did with Tielemans.”

So there we have it, Anderlecht’s pain threshold for Dendoncker is actually a lot less than previously leaked.