Isco has played 171 minutes across four appearances in the league for Real Madrid this season.

On October 21st, we carried a report from AS, who explained Arsenal and Manchester City are ‘crazy’ about the playmaker and a move to either of the clubs would be a ‘magnificent solution’ for him.

Three days later, Sport explained the Gunners and Pep Guardiola’s side ‘closely follow’ the former Malaga star and Los Blancos have set a base price of €60m.

Monday’s edition of AS takes a look at the players who could leave the La Liga side in January. Isco could look for a new club in order to get regular playing time to improve his chances of making it to Euro 2020 with Spain.

He hasn’t featured for the national team in the last two international breaks and Robert Moreno has already suggested players who don’t feature regularly for their club will not make it to next summer’s European championship. 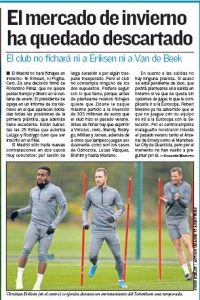 AS states Unai Emery’s side and the English champions showed interest in Isco in the summer. However, for January, neither Arsenal nor City have asked Real Madrid for the player again.

We are of the belief that Isco would only consider a move (either loan or permanent) to Arsenal or City if he is assured of regular playing time.