Last month we brought you an update on the future of Christopher Nkunku and the fact Arsenal were still in the race for his signature.

The Gunners have been linked with the young midfielder since January and L’Equipe stated they were still keen, although it seemed the player was close to joining RB Leipzig.

L’Equipe have updated that story today, and Nkunku is still close to heading to the Bundesliga and joining Leipzig.

The move is ready to be completed, with the German club paying €15m for his services. Nkunku, however, has ‘asked for a period of reflection’.

According to the newspaper, the 21-year-old is waiting for another club to come in for him and is specifically looking at Arsenal. In fact, he is waiting for the Gunners interest to ‘translate to an offer’. 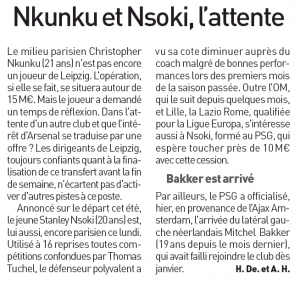 Whether that offer ever comes is debatable. Arsenal are undoubtedly interested in Nkunku and did chase him last season.

But with limited funds available to Unai Emery this summer, they will perhaps be focusing their efforts on solving other issues, such as those in central defence, before spending €15m on a talented youngster for the future.