Ever since Mino Raiola publicly confirmed Paul Pogba wanted to leave Manchester United this summer, there’s been a flurry of articles surrounding the Red Devils’ interest in Sergej Milinkovic-Savic.

Everything has quickly snowballed into claims of a deal being reportedly ‘one step away’, with Igli Tare, Lazio’s director of football, travelling to England to ‘close’ the deal, which is all very exciting.

However, Il Messaggero try and calm everything down on Monday, explaining that while there is interest, no offers have been made just yet for Milinkovic-Savic.

Mateja Kezman, who acts as the Serbia international’s agent, has allegedly also been in England for the past three days with his ‘collaborators’ after working ‘for weeks’ on his client’s future. 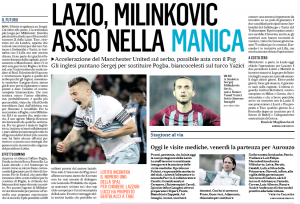 The former Chelsea forward has apparently met with Manchester United’s top brass ‘many times’ to ‘come up with a strategy’ that would meet the demands of Lazio’s owner, Claudio Lotito.

It seems everyone is working towards getting this over the line, with the two main obstacles being Paul Pogba and the Serie A side’s chairman’s excessive requests (claimed by Gazzetta as being €120m).