Finances are the be-all and end-all in football these days and often a club’s future, and it’s balance sheet, can depend heavily on selling one particular player.

That’s certainly the case for Boubakary Soumaré at Lille, with the French side knowing they can make a big profit on the midfielder when the time comes for him to depart.

That nearly happened in January, when Newcastle came calling with a €45m bid in the January transfer window.

Soumaré, though, had grander ideas. He rejected Newcastle’s proposal and it was later claimed he fancied a move to likes of Liverpool or Manchester United in the summer.The Magpies were left disappointed, Newcastle fans cursed their luck, and everyone got on with things.

Except it seems, for Lille. Rather than accepting the player’s wishes and waiting patiently until the summer, when the bids will likely be forthcoming anyway, L’Equipe suggest they’ve taken the whole affair very badly.

The newspaper explains that after rejecting a move in January, Soumaré has found himself down the pecking order at the French club, failing to make an appearance since January 26th and even failing to make the squad for the recent defeat to Marseille.

Nobody is quite sure why this is the case, but the insinuation is that Soumaré is being punished because he turned down the Newcastle move. 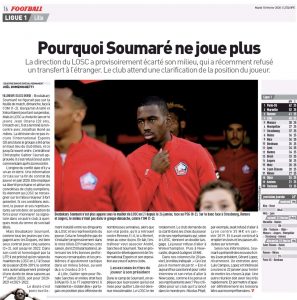 According to Soumaré’s camp, the pressure being put on him to leave the club is currently ‘unbearable’.

Lille deny this, and instead have accused the player and his agents of speaking in ‘double talk’.

Soumaré has since apologised in writing to the club’s president Gérard Lopez while there was also a meeting on January 22nd to try and ‘set the record straight’, with another planned soon to allow for a ‘definitive easing of tensions’ between all parties.

Whether that solves the issues remains to be seen, although at this point Soumaré probably thinks that move to Newcastle may not have been such a bad idea.

Manchester United player waiting for transfer love to be reciprocated –...