Paul Pogba has been restricted to only two starts in all competitions for Manchester United since October’s international break and has completed the full 90 minutes only on one occasion.

He’s been forced to spend time on the bench with the Red Devils and earlier this week, Didier Deschamps stated the midfielder “cannot be happy” with his situation at Old Trafford.

The 27-year-old started for France in their 2-0 friendly defeat to Finland on Wednesday, which was the latter’s first ever win against the world champions. He was replaced by Chelsea’s N’Golo Kanté in the 57th minute.

L’Equipe aren’t pleased with the United player’s latest performance for Les Bleus, rating him 3/10… they didn’t hold back when being critical of his display.

The newspaper states ‘the world champion midfielder had no legs or imagination against Finland. Paul Pogba’s fall is gloomy and at this rate his winter is shaping up to be freezing.’

Pogba is clearly not enjoying his football right now. It’s stated the former Juventus star is experiencing one of the worst phases of his sporting career, and his performance on Wednesday ‘symbolised everything that’s wrong with his game’.

Talking about yesterday’s display, the outlet states he ‘lacked precision, flair, projection, anticipation, even causing a foul at twenty meters from his goal (36th).’

The Frenchman struggled in the final days and weeks of José Mourinho’s reign at United.

L’Equipe are of the belief that ‘under Ole Gunnar Solskjaer, Pogba’s status has ‘eroded in some proportions’ and it’s an even worse situation than it was under the current Tottenham manager’s guidance.

It’s claimed the only reason for Pogba to be happy is that he has started the match. 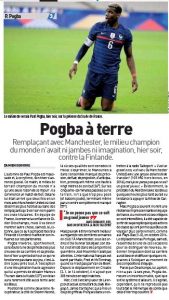 France take on Portugal in the UEFA Nations League tie on Saturday and even though he retains the confidence of Deschamps, L’Equipe warns ‘he will have to show something else on Saturday in Lisbon than what he offered against Finland, if he intends to maintain his influence over his teammates.’

‘The trip to Portugal on Saturday looks like one of those occasions to stand out again, give back the boost his career would need and diffuse some headaches for Solskjaer, when it comes to his lineup’.