Scoring two goals in his first three league games, Romelu Lukaku got off to a very good start at Inter following his move from Manchester United.

Part of the reason for his exit, other than not being first choice striker under Ole Gunnar Solskjær, will have been the possibility of Champions League football, and he got his wish by starting in Antonio Conte’s line up against Slavia Prague on Tuesday.

However, things didn’t go so well for him as he failed to find the back of the net or even have much of an impact throughout the game, and now there’s already suggestions another striker could be brought in in January to replace him if needed, with Chelsea’s Olivier Giroud’s name thrown in the mix.

Lukaku did force a very good save from Ondrej Kolar right at the end of the game, but other than that, his performance was very sub-par, as Gazzetta dello Sport gave him a 4.5/10 for his performance.

They admit the game didn’t suit his preference, which would be balls he can chase, but they expect him to still be able to hold up play if the game isn’t all that open.

However, they describe his first touch as ‘cumbersome’ and are somewhat amazed he was ‘never a factor in the aerial game’, urging him to ‘find better form’.

On top of that, the forward only managed 47.1% of his passes, as was pointed out by FC Inter News, using WhoScored’s stats as their reference. 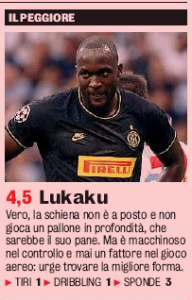 That’s why there are already some question marks regarding the Belgian, and why a handful of names are being suggested there by Calciomercato.it as potential help for Inter, including the aforementioned Chelsea striker.

It’s no secret the club also wanted to bring in Edin Dzeko in the summer to lend a hand, but that never happened, so ‘work is going ahead’ behind the scenes, with names being thrown around.

That last part makes little sense for the Frenchman, however, since his contract at Stamford Bridge is set to run out next summer, and at the rate things are going under Frank Lampard, who clearly prefer Tammy Abraham to the veteran, it would be surprising to see him renew beyond the current campaign.

Perhaps a cheap transfer then? They see him as a ‘potentially low cost’ option with international experience, who could always be used ‘for the final sprint’ in the second half of the season.

The pressure is on, Romelu.