Barcelona are again at the stage where they’re quickly giving up on Ousmane Dembele remaining at the club beyond the summer, and that brings Raphinha more into focus.

The Leeds United player has long been seen as the Frenchman’s replacement, but the Catalan club’s problem is money. Claims of a cut-price deal of around €35m, even after Leeds avoided relegation, have now thankfully been dropped, and Barca know they need to raise money to pay for the move.

Meanwhile, Raphinha and his agent Deco are being patient, only wanting the move to the Camp Nou. Monday’s edition of Sport reports the pair are ‘stopping each and every offer’ from other clubs, as they wait for Barcelona to agree a fee with Leeds United. 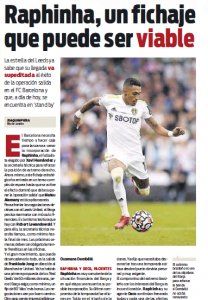 Liverpool are said to be one of the clubs to have been knocked back, although their interest is surely now questionable after agreeing a deal for Darwin Nunez.

Whether Raphinha and Deco will change their stance should time go on and no acceptable offer arrives, is an unknown at this stage.