Monday’s edition of Record has an article on Palhinha’s future, and whilst there doesn’t seem to have been any great leap forward made, it’s still apparent the Portuguese press expect him to join Wolves.

The Premier League club are said to have an ‘agreement in principle’ with Sporting for around €20m, with some reports believing there’ll be a little extra in bonuses on top of that figure.

Wolves have faced some late competition from Fulham, but Marco Silva’s side are only prepared to pay €18m. That’s of course a worse deal for the Lisbon club so there’s no reason for them to consider.

On top of that it’s made clear Palhinha wants to join Wolves, with Record saying he’s even 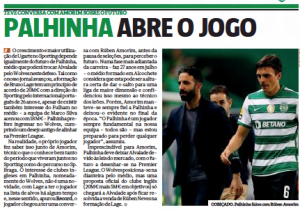 informed Sporting manager Ruben Amorim of his desire. Therefore, with everything seemingly in place, there doesn’t appear to be a lot holding this transfer back.

However, Record end their article by claiming Wolves are waiting for Ruben Neves’ exit before they go through with the deal. Whether that’s true or not remains to be seen.