Currently on loan at FSV Mainz 05 in Germany, Bojan Krkic’s Stoke City career appears to be coming to an end.

Used very sporadically by Mark Hughes prior to the temporary agreement, the former Barcelona starlet decided to swap leagues in order to get some guaranteed game time, which he isn’t exactly getting.

Starting just four games from a possible 10, the 26-year-old has been unable to stop his new side from going on a terrible five game losing streak as they currently sit 15th in the Bundesliga.

Unlikely to continue in Germany when the season comes to an end, the Spanish forward, whose contract with Stoke runs until 2020, wants to return to his home country, with Espanyol a possible destination.

Knowing a return to his former Barcelona side is impossible, the Stoke loanee has, according to Esports COPE, relayed by Sport, been offered to the other local team as he hopes to leave England in the near future.

Unfortunately for Bojan, Espanyol aren’t all that interested in his services, and the Spanish newspaper explain a transfer there is unlikely. 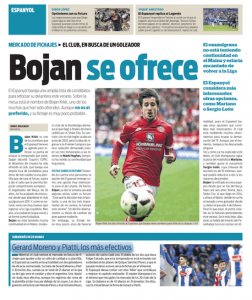 While he is on the club’s list of potential players to strengthen their frontline, the Stoke forward isn’t the number one on the list, with Real Madrid’s Mariano or Osasuna’s Sergio León both ahead of him.

Considering his contract with the Potters still has three years left on it, the Premier League side will want to make a profit on the £1.5m they paid for him in the first place, and with a few clubs expected to be interested, Espanyol will likely be outbid for his services.

One to keep an eye on in the coming weeks, however.