Former England, Milan, Roma, Juventus, Real Madrid and Russia manager Fabio Cappelo has been looking at this week’s Champions League matches for Marca. The Spanish newspaper probably expected a little more than they ended up getting, but Cappello’s take on Leicester City is rather curious.

The Italian has stated: ‘Atletico is a team, Leicester are individuals’

For all the criticism thrown at Leicester City this season, to deny they’re a team is a strange angle. The club won the Premier League title based on being a team. The very meaning of a team: More than the sum of its parts. 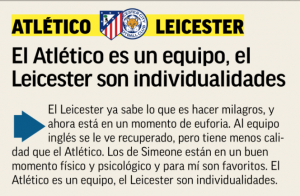 And then, when things started to go wrong, they collapsed as team too. It had so clearly all been about ‘team’ that when one or two got on the slippery slope, the rest were dragged down too.

Atletico Madrid are certainly a team too, indeed Claudio Ranieri has said it’s what he based some of his Leicester City plans on. Capello, now 70 years of age, seems to enjoy his lofty status and passing out judgement, but this time he’s very wrong indeed.