Kristoffer Klaesson was one of the new faces to arrive at Leeds United, from Vålerenga, in the summer.

The Whites allowed Kiko Casilla to join Elche on a season-long loan deal and the 20-year-old took the Spaniard’s place in the squad, as a backup for Illan Meslier.

Klaesson has been on the bench for all three league fixtures, including the opening game of the season against Manchester United at Old Trafford. The goalkeeper, however, has made three appearances for Leeds’ U23 side this season.

Marcelo Bielsa’s side had long followed the Norway U21 international and their interest in his services had pleased the custodian in 2020. He had to wait for a year before making a switch to Elland Road.

“No, this is still a bit unreal, I have to admit it. It is very nice that Leeds dared [to do] this, to bet on me,” Klaesson told Norwegian newspaper Dagsavisen. 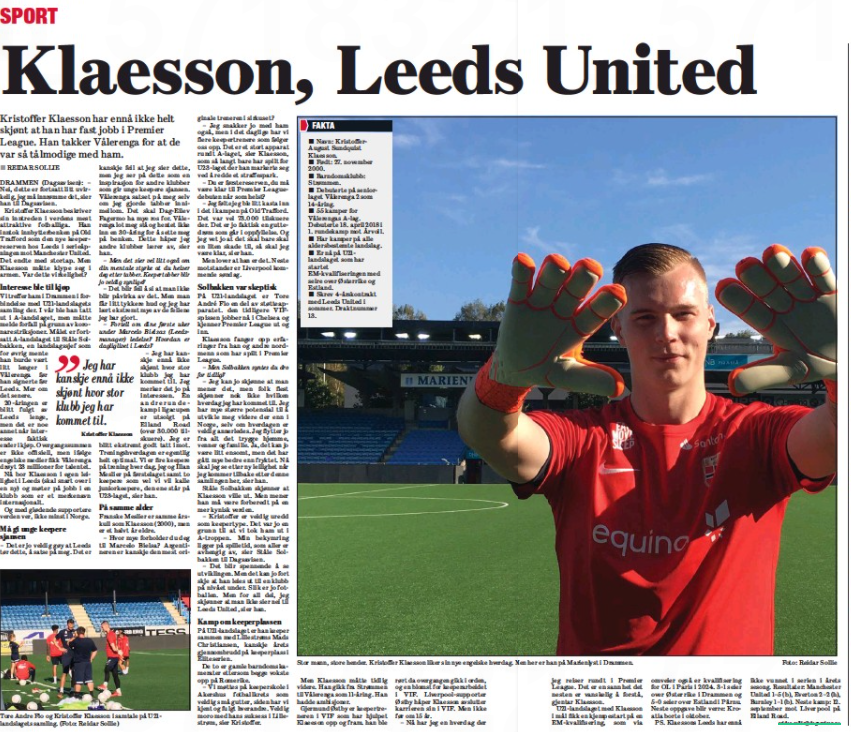 The keeper hailed Vålerenga for continuing to retain faith in him, despite making mistakes during his time with them.

“It may be wrong for me to say this, but I see this as an inspiration for other clubs that give young goalkeepers a chance,” he explained.

“Dag-eilev Fagermo should have a lot of praise for that. Vålerenga let me stand and did not bring in a 30-year-old to put me on the bench. I hope other clubs learn from this.

“It is wrong to say that you are not affected by it [mistakes]. But you get a little thicker skin and I have learned extremely well from the mistakes I have made.”

The Norwegian is delighted to have made the jump to Leeds United and has had a good start to his life in England, even though he’s yet to represent the English club’s senior team.

“I may not yet have realised how big a club I have come to. I can feel it in my interest. A league cup match sold out at Elland Road (over 30,000 spectators),” he added.

“I’ve been extremely well received. Every day training is really optimal. We are four goalkeepers in training every day, me and Illan Meslier in the first team as well as two goalkeepers who we would call junior goalkeepers, one of whom is in the under-23 team.”