Juventus were battered 4-0 by Chelsea in the Champions League this week, another poor day in a difficult season for the Turin club.

They currently find themselves eighth in Serie A, and are 11 points behind leaders Napoli and AC Milan after 13 matches so far this season.

Sports director Federico Cherubini of course travelled for the match, but didn’t go back to Italy with the club, instead staying in London, with Tuttosport saying the reason for that is transfer talks.

Fulham are dragged into the picture, with suggestions that the stay in London and rumours about Juventus being keen on Aleksandar Mitrovic are no coincidence.

Looking for an alternative to Dusan Vlahovic, given the Fiorentina player is attracting widespread interest, Mitrovic would be a Plan B. However, if Juventus are keen on signing the Fulham player in January then they’re likely to get a surprise when it comes to the Championship club’s stance. 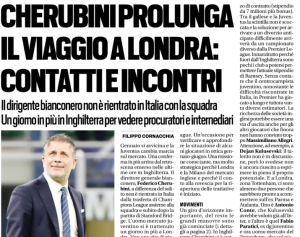 The 27-year-old has a contract with Fulham lasting until June 2026, and this season he’s scored 21 Championship goals in 25 matches.

That sees the Cottagers top of the league and looking good for promotion to the top flight.

Endangering that by selling Mitrovic just doesn’t make sense and Juventus almost certainly wouldn’t offer enough to tempt Fulham, even if things got to that stage.