Ole Gunnar Solskjaer has made no secret of his desire to keep Juan Mata at Manchester United beyond this summer.

The Spaniard sees his contract expire at the end of June, and there had been talk of a return to La Liga. Barcelona was even pushed forward as an option by the Catalan media, with it being claimed Mata had been offered to the club by his father.

In April, Juan Manuel Mata confirmed there’d been a renewal offer, but also stated there’d been interest from elsewhere: “Manchester [United] have offered to renew [Juan’s contract]. We are very happy, but there are proposals from Champions League clubs, maybe from Spain. But today is not the day to talk, it is not yet decided.”

It was added that given he has great respect for United supporters, Mata wouldn’t join either Manchester City or Liverpool… not that there was any claim of offers from either club. 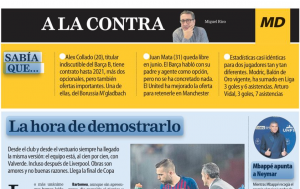 On the back page of today’s Mundo Deportivo, the well connected Miguel Rico reiterated that talks had taken place with Barcelona but ‘nothing materialised’.

It’s stated Manchester United have improved their renewal offer, and a stay at Old Trafford is the insinuated consequence.