Saturday’s edition of Mundo Deportivo has multiple articles about Barcelona’s need to make money this summer, and it would appear the club are basing the majority of their hopes on the Premier League.

Finances around European football have been hard hit, and whilst that includes the Premier League there’s a feeling around Europe that English clubs haven’t been as drastically damaged as others.

Southampton and West Ham, and a potential swoop for Junior Firpo, get a mention in two separate Mundo Deportivo articles. One states that the Premier League pair are preferred bidders because they are ‘willing to pay’ for the player.

That means, Southampton and West Ham would be prepared for a full transfer, whereas clubs in Italy have been more interested in a loan deal for Firpo. 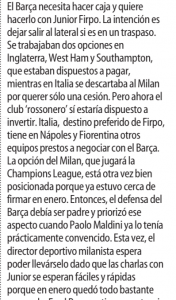 Barcelona aren’t interested in a temporary exchange, wanting to make cash this summer from the left-back.

Whilst it will still be considered that English clubs, such as the Saints and Hammers, are likeliest to provide a good transfer fee, Mundo explain AC Milan are now considering a permanent transfer too.

Other Serie A clubs would still be leaning towards a loan.