If there’s one major problem that Southampton have this season, it’s scoring goals. Much like last season, putting the ball in the back of the net is not the Saints’ forte.

Danny Ings is the club’s top goalscorer this season with six, but beyond that, his fellow forwards have been slacking.

It’s an issue that has plagued Southampton for a while and one they tried to rectify in the summer with the signing of François Kamano.

There were several reports they were keen on the Bordeaux winger and trying to secure his signature. Indeed, Southampton also had a scout at a recent Bordeaux game.

L’Equipe have a piece on Kamano today, and they’re once again pushing the fact that Southampton wanted him in the summer.

They say that Saints ‘showed an interest’ in the winger with Bordeaux director of football Eduardo Macia stating that ‘good clubs approached me’ as well.

The Ligue 1 side were open to his transfer but instead decided to keep old of Kamano because they were convinced he could perform for them instead. 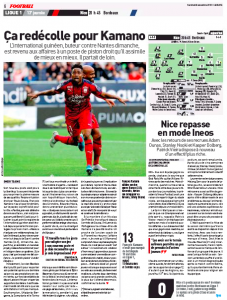 That’s yet to happen, with him managing just one goal in seven appearances this season, and Southampton would be wise to keep an eye on the situation.

If he doesn’t improve drastically in the coming months, they may be presented with a chance to sign a player they’ve been keen on for quite some time.