Southampton are regular watchers of matches in Portugal and it’s no surprise to see them at more than one game over a weekend.

Over the past few days the Saints have sent a representative to watch Benfica beat Vitoria Setubal, and also had someone at the match between Etoril and Maritimo.

It’s not the first time Southampton have watched Estoril during the current season and there’s every chance the club have earmarked a potential target and are currently mkaing their mind up about a move.

Benfica were also at the Estoril match and Portuguese newspaper A Bola believes they’re attentive to young Brazilian Lucas Evangelista. The 22 year old impressed during Estoril’s 1-1 draw with Maritimo, scoring his side’s goal. 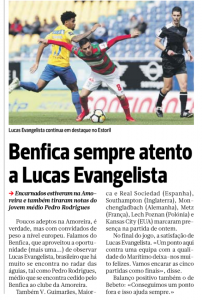 A Bola talk up his performance, and there’s every chance Southampton’s eye has been caught as well. Playing as part of a pair in midfield, the youngster took on a lot of responsibility.

If Southampton are keen, they’ll have to assess the player’s work permit suitability.