The interest from Everton and Southampton in Sporting defender Ruben Semedo has made it to the Portuguese media today.

As covered by us this Monday, it was an AC Milan fan website who reawakened the rumours over the weekend, as they interviewed an agent who recommended the player and said the two English clubs have been following him.

The information is endorsed by today’s edition of A Bola. They say the fact that Semedo has lost his place in the starting line-up hasn’t changed anything as both clubs have been constantly sending scouts to watch him. 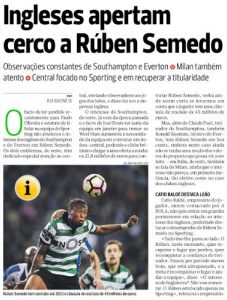 It’s claimed that Southampton have been following Semedo since last season, and their need of a new defender is now bigger as José Fonte has left for West Ham United.

The Saints would be ready to offer €22.8m, which is still considered to be a low amount due to the player’s release clause of €45m. In Everton’s case, A Bola are unaware of how much they would offer.

A Bola managed to talk to Semedo’s agent Cátio Baldé, who explained the player’s situation and claimed he’s not aware of the approaches: “All of this passes over him. Ruben, at the moment, wants to recover the trust from the manager.

“He’s been through a less good period, which he’s overcome, and the goal is to reconquer the place and help the team.

“The interest from England? I won’t comment. Ruben is only focused on Sporting.”

Belief player ‘definitely says goodbye’ to club and will move to...