Calciomercato, on New Year’s Eve, gave us a lovely rumour to look forward to throughout January: Manolo Gabbiadini to Milan.

In need of attacking reinforcement, Gennaro Gattuso’s side allegedly turned their attention to the Southampton forward, who has fallen even more out of favour at St Mary’s ever since Ralph Hasenhuttl replaced Mark Hughes.

It was said Leonardo, Milan’s technical director, had contacted the player’s agent for ‘exploratory’ talks, with said representative then allegedly flying to England on Wednesday to have a chat with the Saints to see where things stand.

Well, it appears Gazzetta dello Sport on Wednesday have the situation covered, confirming Milan do indeed like Gabbiadini, but that Southampton are being stubborn about an exit. 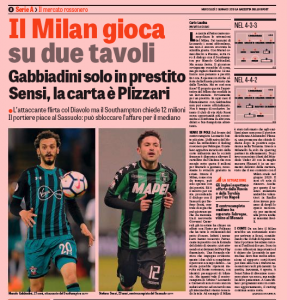 Should Milan come forward, the Italian goalscorer would ‘arrive in a hurry’, but the Premier League side are said to want €12m for any transfer, and ‘are not thinking about a loan’.

Gazzetta do hint that could change down the line with a sneakily placed ‘for now’, and (this is just us spitballing here) it could all come down to how Gabbiadini handles himself over the next month.

If he’s happy to fight for a space and prove Hasenhuttl wrong, then he’ll stay, but if he throws his toys out the pram and tries to force a move, perhaps a loan might not seem so bad after all over at St Mary’s.

We’ll have to wait and see on this one.