Over the past week or so several English clubs have been dragged into the race for Ruben Semedo, with their presence often seeming to be nothing more than window dressing.

Everton, Stoke City, and Newcastle United have all been dragged into a supposed battle for the Sporting defender, with Southampton repeatedly mentioned. For a while Southampton’s interest has seemed the most likely to be true, with claims going back to November in the Portuguese media.

It’s not just Premier League clubs who have been credited with interest. The Milan sides have been thrown in, and Saturday’s edition of O Jogo tries to build up a case for Lille pushing hard to sign Semedo.

They seem pretty convinced, but the claims look motivated by Marcelo Bielsa taking over at Lille, so everyone wants to talk about the club, and Lille already having several Portuguese players. 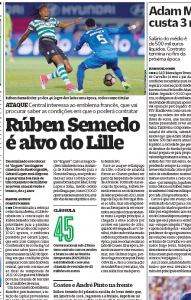 It’s unlikely Lille could compete with Southampton financially for Semedo, so if Claude Puel interest is genuine this shouldn’t be too much of a worry.

What is becoming increasingly clear is there’s a concerted effort to push the 23 year old to market, which could be beneficial for Southampton and others.