If there’s one area of the pitch where Southampton could really do with some work in, it’s in the goalkeeping position.

That’s why we weren’t surprised to Southampton’s name crop up in an article looking at the future of Lazio’s Thomas Strakosha, who appears to be on his way out from Lazio in search of a new adventure.

La Republicca are the ones reporting it, claiming the Saints are ‘interested’ as they are ‘looking for a goalkeeper’. 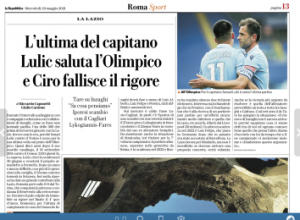 Once seeing a €50m offer from Liverpool for his services rejected by Lazio, the Albania international can ‘now leave for an offer surely far inferior’ to that put forward by the Reds three years ago.

Good news for Southampton, who might have to open the chequebook a little bit to get their man, but it appears it certainly won’t bankrupt them.