On Tuesday, when the Portuguese media had many stories on Manchester United’s efforts to sign Sporting fullback Nuno Mendes, it was claimed that the player’s agent Miguel Pinho would be in England this week.

Since the official also represents Bruno Fernandes, it was reported he’d be meeting the Red Devils star, and taking the trip to discuss the youngster’s move to Old Trafford as well.

Today there are two Portuguese newspapers reporting the visit. One of them is Correio da Manhã, who in a short story, first claim that Pinho was at Old Trafford to watch Manchester United’s match against Fulham.

They then say that he also approached Nuno Mendes’ potential move to the Red Devils, claiming he could already bring an offer to Lisbon. It’s said the Lions want €70m for the move, and that could be made of €40m or €45m in cash, plus the loan of a player and performance bonuses. 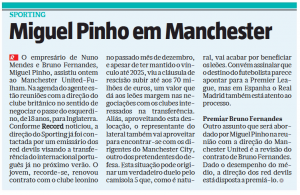 Meanwhile, newspaper Record features a bigger story, also confirming that Pinho was watching the match between Manchester United and Fulham.

The outlet recalls they already claimed that Sporting have been contacted by an ’emissary’ from the Red Devils regarding Nuno Mendes’ transfer in the summer.

They point out that the likes of Manchester City and Real Madrid are also interested in the player, and at this stage, it looks more likely that he’d move to the Premier League.