With the season now over and Southampton finishing in a disappointing but still very comfortable 15th place, Ralph Hasenhüttl has a busy summer ahead of him.

One of the areas where the Saints will likely recruit will be in goal, with none of the current options seemingly up to scratch for the Premier League.

One of the names to have popped up in recent weeks is that of Thomas Strakosha, who is on his way out from Lazio, whom Crystal Palace are also interested in.

The news comes from La Repubblica, who explain both the Eagles and Southampton are among the suitors for the Albania international.

Much like the Saints, Crystal Palace will likely undergo a summer of change, with Roy Hodgson leaving the club and a new manager coming in. 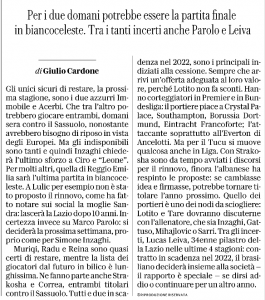 With 64 goals conceded in 37 league games and at 34 years of age, it remains to be seen if Vicente Guaita is the man for the job next year, with Jack Butland seemingly far off a starting spot at Selhurst Park.

Strakosha has proven himself in the past to be a very reliable goalkeeper, having been the subject of a €50m bid from Liverpool, but lost his spot to Pepe Reina this season after he turned down a renewal offer from the Serie A side.

Either way, the fee demanded by Lazio for their goalkeeper will be far smaller than what they initially turned down, meaning the 26-year-old is affordable, with just one year left on his deal.