On deadline day of the winter market, Manchester United agreed a deal with Chinese club Shanghai Greenland Shenhua to take Odion Ighalo on loan for the rest of the season.

Prior to signing the Nigerian, the Red Devils were interested in AFC Bournemouth’s Joshua King.

Speaking to Norway’s TV2 earlier this month, the Cherries frontman spoke about how the move would have been a dream for him.

With the Chinese league now delayed due to the Coronavirus outbreak in the country, Rafael Benítez’s side Dalian Professional are currently training in Marbella. 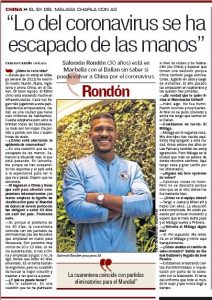 This gave Spanish newspaper AS an opportunity to speak to Rondón and during the course of the interview, he was asked about the reports linking him to United in January.

Responding to that, Rondón said: “There was something. It was not smoke. They were rumours and very strong. In the end it could not be specified and now I have to focus on Dalian.”

Tottenham clause for Marcus Edwards rubbished – He could move to another PL club, Spurs get 50%

Tottenham clause for Marcus Edwards rubbished – He could move to...

Southampton man has been ‘proposed’ to club – Agents working to...