Home Europe From Italy: Man United transfer in Solskjaer’s hands, price down if he...
SHARE

With the big noise around Paul Pogba’s situation at Manchester United for the past few days, it was inevitable the Turin media would relate it to a Juventus return.

So it’s no surprise to see newspaper Tuttosport having an entire page for the midfielder. They highlight the quotes from Mino Raiola, Ole Solskjaer and Paul Scholes which have been in the headlines lately.

When speaking of Pogba’s possible return to the Old Lady, Tuttosport writes that things had been quiet, but all this controversy could heat it up.

It should all depend on how the Red Devils treat Paul Pogba from now on, the outlet says. In case they choose to leave him aside, that would only increase the possibilities of a sale. 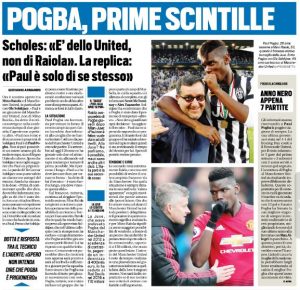 However, that would also devalue Paul Pogba, making him worth way less than the €150m said to have been demanded by Manchester United last summer.

Tuttosport says it’s all in Ole Gunnar Solskjaer’s hands now, because if he chooses not to pick a fight with Paul Pogba, then it would be a lot harder for Juventus to land the midfielder for a reasonable fee.